Why these controls are there, what effect they have and finally how to control them using “stops” to balance them.

If you get lost in boring text, just skip to the bottom and see the photos with different settings.

When taking pictures, the sensor that registers the light needs to have enough light to properly expose the picture. If it isn’t receiving enough light the photo will be dark, and if it received too much it will be too bright.

So far so good, so since the lighting conditions change quite a bit, the camera needs to have some ways of controlling the amount of light the sensor registers.

The camera has 3 different ways of controlling the light:

Aperture:  This has the same function as the pupils of our eyes – the aperture is nothing more than a way to limit the amount of light that reaches the sensor. It does so by closing an almost circular hole in the lens where the light has to pass through. If this is just a pin hole almost no light gets through to the sensor. When we look at how light sensitive a lens is, we are looking for how big this opening can get to let in as much light as possible – this is the lowest possible f-number on your lens e.g f-2.8. See the five blades in the center of the disassemble lens below, there are the ones that open or close for the light: 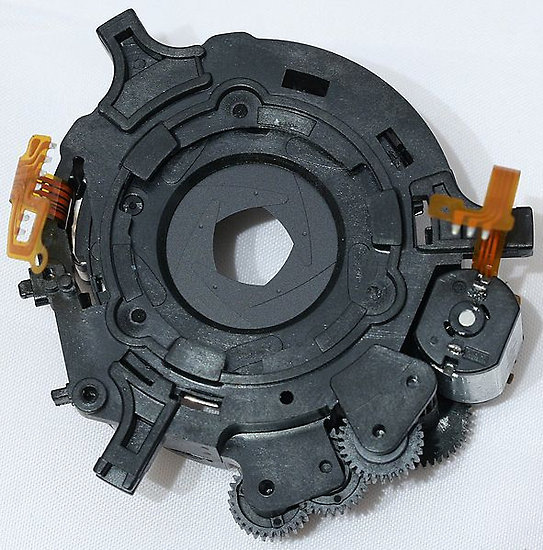 ISO:  Amplification: If the shutter speed cannot be slow enough to let in enough light, and the aperture opening cannot be opened any more to let more light in, then we need to amplify the analog signal the sensor receives to get enough light registered. The problem with this is that the amplification not only amplifies the signal, but also the noise. This is why you see noise in photos with high ISO. The best quality pictures are therefore achieved at the lowest real ISO value, typically ISO 100 (some cameras fake lower ISO by sacrificing dynamic range, but that is another story). But don’t be afraid to use higher ISOs, as it allows you to be more creative with the other settings, but you have to know where the limit is for your camera – how much noise will you accept.

The Effects the basic controls have

Okay, so we have these three controls that tie together to determine the exposure of our photo. There are many ways to get the same exposure, but in order for you to be able to choose, you must know what the effect of each of them have on your final photo:

Shutter speed:  Fast speeds freezes the action, slower blurs it. If you want light trails from cars at night you will need a tripod and a long exposure time e.g. 30 s or more.

Aperture:  It affects two things: the Depth of Field (how much is in acceptable focus), and image quality. Closed aperture (like f/16) are used to get everything in focus. Fully opened aperture like f/1.8 are used to narrow what is in focus, e.g. to blur the background. You image quality is typically going to suffer if you go much beyond f/16 like at f/22 (because of a diffraction) and typically lenses deliver the best quality around f/8, but it really depends a lot on the lens. It is not something you usually need to worry too much about, but it is good to test you lenses, so you know how they perform. If you have dust on your sensor this dust will come into more and more sharp focus as you close the aperture, so at f/16 you may see some well defined specks of dust if there are any on your sensor. I bright sun light the aperture is typically closed down, so this is why the specks are especially visible in sun light. However, modern cameras do a lot to prevent dust, so you might be lucky and not know what I’m talking about. In any case it can be healed brushed away in Adobe Lightroom should they be there. You can see all the contributing factors to Depth of Field in this article.

ISO:  This is basically only used to give some wriggle room for the other two controls, as it is very seldom it is a high ISO look you are going for in itself.

You could of course set your camera in manual mode (“M”), but this is usually only something I do when using an external light meter, or when the camera refuses to do as I want otherwise.

It is much easier to use the “Av” or “Tv” modes (“A” and “S” on a Nikon ) which allow you to control either aperture or shutter speed, while letting the camera control the other settings.

Once you have set your setting set and press the shutter half way down to see what the camera has set the other settings to, you can change the ISO to indirectly control the other setting if you are not happy with them.

What do you mean? Well say that I want a blurry background and I set the camera to “Av” mode (A on Nikon), and set the aperture to the lowest possible F-number, like f/2.8 dependent on the lens. I set the ISO to 100 if I think there is enough light for it (just a guess initially), and then I zoom in as much as I can e.g. 200 mm, and get as close to the subject as possible. Then I press the shutter down half way to get a reading of what the camera would set the others controls to.

If it says: 50  F2.8  ISO100  in the display, that means that the shutter speed is 1/50,  and it should have been 1/200 or faster for a 200 mm focal length (if there is no Image Stabilizer / VR for Nikon, in the lens). So I can either get a tripod to avoid camera-shake-rule problems, or simply increase the ISO. Let’s increase the ISO, which forces the camera to chose a faster shutter speed (to keep the same exposure, as a faster shutter speed would let in less light).

If you are only taking one quick shot where you want to control the aperture, you don’t need to go into “Av” mode (or “A” on Nikon). You can in “P” mode after having pressed the button down half way adjust the aperture with one of your dials.

We will get into “stops” later in this article, but changing the ISO above to 400 was no guess. I knew exactly that ISO400 would give me 1/200 s shutter speed. You will later learn to balance settings using “stops”, and you will fully understand the following: I needed the shutter speed to be 2 “stops” faster, so I needed to increase the ISO with 2 “stops” to get that. This will make sense once I’ve shown you the “stops” tables.

If you want to sacrifice control, you can just set the ISO at “AUTO” – this way it will be more point and shoot, and you don’t need all thought considerations as in the previous section, but you are still telling your camera more specifically what it is you want to happen than just using full auto mode.

If you want to control the aperture set it in “Av” mode (“A” on Nikon) and let the camera control everything else.

If you want to control the shutter speed set it in “Tv” mode (“S” on Nikon) and let the camera control everything else.

This way you lose the ability to compensate whatever settings the camera comes up with, but it will not do a bad job at guessing. I always set the ISO manually to be more in control.

The Bride does something funny at the wedding and you quickly point your camera at the funny scene and take a few shots, but you forgot you took some fancy flower shot 10 minutes ago with a really special setting, and all the funny photos are useless. I have done this so many times that I remember this by now – once one feels the pain on ones own body it is easier to remember

So always return the camera to your usual setting when done experimenting!

Ready for the good part? Aperture, shutter speed and ISO can all be measured in “stops”. This makes balancing them easy. If you change one of the setting in one direction, you just have to change one of the others (or both) in the other direction to get balance (=same exposure as before). If you take away 2 stops from the aperture, you can give 1 stops back with the shutter speed and 1 stop back in ISO and end up with the same exposure level. It is up to you how you want to balance the three controls any way you like!

Let’s get the boring tables over with, so we can get on with the fun part:

Here is a series of ISO values.  Each value moving to the right is twice the value of the preceding number, and represents twice as much light amplification (one stop):

Here is a series of shutter speeds.  Each value moving to the right is around half the value of the preceding number, and represents half as much light as the preceding stop:

Here is a series of apertures.  Each value moving to the right represents half as much light as the preceding stop:

So moving three steps on this scale is a whole stop difference. I don’t have to memorizes this table, since I know that 3-clicks on my camera dial is one stops difference.

Just to be clear: if you want less light (stop down) you increase the f-number  AND/OR  increase shutter speed  AND/OR  decrease the ISO.

Okay, so if you press down the shutter button half way down on your camera at it reads: 125  F4  ISO200 . If you then turn the dial to say you want the aperture til be F5.6 (1 stop less light), then the camera knows that the shutter speed need to be one stop more, and it shows you: 60  F5.6  ISO200 . Yes, the camera is “cheating” and has the tables built-in and uses them when you change the settings to get the same exposure. Now you know how.

Let’s look at three different photos of the same subject, with the same exposure, but different settings:

The first one is blurred because the shutter speed is way to slow – we do not want to go below 1/30 when people move  even if we are using a tripod. Notice the sharp background because we are at f/22 (at this level I would expect the image to be blurred at pixel level due to diffraction, but this cannot be seen in this small photo).

The second image has just fast enough shutter speed to freeze the models (although I would go for at least 1/100 to freeze the action). Notice the background getting more blurred, because we stepped 3 stops up in aperture.

The last image has more than enough shutter speed to freeze a lot of action like hair being tossed around, and notice the blurred background now when the aperture is full opened.

Wow, we have covered a lot of ground here. Now you know how to balance settings to get the effect you want, and not just settle for the cameras best guess!

Any comments, suggestions or errors in my article? Feel free to comment below.